Dorothy and Richenda Todd at the Edinburgh Book Festival 1999

The event took place in one of the many Book Festival marquees set up in Charlotte Square in Edinburgh's Georgian New Town. It probably held about 200 or so people for the talk and although not totally full was not far off it.

The idea of the talk was to give some idea of: 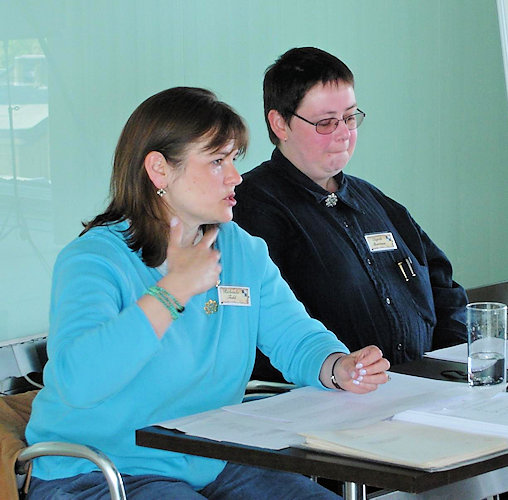 They started by looking at what type of books they were trying to produce, and said that they were trying to avoid the Hornblower type of story which has no overall plan but was a series of individual stories. Richenda felt historical fiction is the most difficult type to produce. Dorothy also felt that publishers were easier to sell to at beginning of her career. She reiterated that Lymond was all planned out but that the sources were often not recorded (which is of course where Elspeth Morrison came in.)

Lymond was edited first in US, by Lois Cole and Bob Gottlieb. Richenda came in during the House of Niccolo on Race of Scorpions and had the manuscript dropped on her desk when she arrived - which must have been a pretty intimidating start. She had to quickly read the previous books to ascertain the style used before she could do any editing. As we know, Dorothy was initially turned down by various UK publishers and was first published in the US.

It was Alastair who suggested it be a series - Dorothy said "he was a newspaper editor ....and she was used to obeying" :-)

Lymond was marketed in US as the next "Gone with the Wind" and amongst other promotional events 10 salesmen walked down the street in "Crawford tartan" ties advertising it. It was subbed to Cassell in the UK, which she was very happy with as all her school dictionaries were done by them so she felt they had a certain authority!

Cassell published Lymond then unfortunately in a change of direction ditched their fiction list altogether. While Dorothy was looking for a new publisher Rosemary Cheetham of Century phoned her. She had read Lymond at the age of 12(!!) having been given the books by her mother and had grown up with the ambition of publishing them.

The US publisher wanted another series but Dorothy wanted to do individual books instead (like the JJs). She decided to go down that route but that first book turned out to be King Hereafter which then needed 5 years research. Having decided that continuing in that direction would mean only ever writing about another 3 books, she decided to go back to a series with Niccolo.

Returning to the Author/Editor relationship they said that publishers frequently change direction and have different ideas on marketing so it's difficult to maintain a consistent style. Richenda was happy that they'd managed to keep the same jacket artist for all the Niccolos, and also the same proofreader and copy editor. (This is quite an achievement as there have been changes in Michael Joseph and Richenda herself is now freelance rather than working for them directly.)

During this section Dorothy mentioned that 3/4 hour earlier, before having to leave for the talk, she was in the middle of writing possibly the most dramatic section of the entire series. So if it didn't turn out right it would all be our fault! ;-)

They next discussed secrets and how to keep them. To avoid giving the plot away before people have read the book you need to look at things like maps, genealogical tables, ends of chapters, news of places that Dorothy has visited prior to writing each book, etc.

One book had a 15th Century "Cod War". The artist produced a superb exploding volcano but that was not allowed on the cover as it would have given the game away. They came up with a cover in which it was hard to tell the difference between sand and snow! The map also had to be doctored to hide Iceland under the flap and it was skewed to accomplish that - despite the mapmaker's protests that you had to have north pointing straight upwards. Blurbs which gave too much away were often problems with a new publisher.

On the Scales of Gold shock ending - Richenda confessed to being poleaxed and said she sometimes feels dim. ;-)

The main thing an editor does is checking on the shape, pacing and clues to the development in the story. Dorothy never discusses the story as she writes but once it is sent to the editors the first phone call in response is very important. For instance Bob Gottlieb contacted her about the Marion/Nicholas marriage, saying that for the first time he felt she had cheated him of a scene. He wanted to see a Marion/Felix scene to show Felix' reaction and how Marion would deal with it. Dorothy wrote the scene in an hour. If there is a reaction like Richenda's feeling poleaxed she has to look again at the clues that she has included to see if she needs to make things any clearer.

Fax machines came on the scene during the period of writing. On one occasion having just finished a book Dorothy went off to Arran on holiday to a chalet hotel which had one fax machine at the reception desk. Richenda sent loads of long faxes which Dorothy replied to standing at reception while guests gave her their keys or instructions about their meals etc. :-) Some of the faxes were somewhat explicit - they've never been back!

Not just sex but fashions have changed over the years. Cruelty to animals for instance is looked upon rather differently. Sentimentality is not allowable so much now either. Game of Kings is set in aspic, but the JJs are surrealistically in their periods. Readers have to be aware when the various books were written to understand how attitudes and fashions have changed. Because of the unusual nature of the two series with the later-written Niccolos preceding the time of Lymond, Richenda, who doesn't know what the ending is to be, has the flow going forward whereas Dorothy has it going backwards.

Consistency is very difficult. Regarding who does what, Dorothy assumes she will have to check history since she does so much original research which often hasn't been tackled by historians. She also has to constantly work out what speed a camel goes at, how fast and where and in what conditions ships can travel, the speed of bullock carts, letters etc. She always tries to visit the scene to check the terrain.

As an editor - how much can you trust the author? A naval author who Richenda worked with got the ships bells wrong at one point and she started checking everything - it turned out that half of his historical and technical descriptions were wrong! Dorothy mentioned some racy French that was wrong but the US editor picked it up. The Latin tag for Lymond's arms was wrong - she hadn't used the accusative case - and the covers had to be redone.

US editors don't have the same mores of the Europeans so there is a difference in how their editors and readers approach some passages.

Dorothy was given advice early on in her career that you must make your villain as strong as possible or the hero won't be believable. Colleagues must also be top of their tree.

Q. Some characters we get very fond of but then you kill them.

"It's necessary because otherwise the last book would be massive. Endings should however be satisfying. Umar in particular was a turning point for Niccolo. A long series does something that only books can do - subtexts for instance".

Q. Spelling - how do you handle modern readers v period and UK v US

"Dorothy mentioned that recently her word processor gave her the "too many spelling mistakes to continue displaying them" error message while writing Niccolo 8.
Lymond started using the original spellings but it's impossible all through. An important difference in the two series is that while Lymond would quite often be speaking English or sometimes French, Niccolo is almost never speaking English. She puts in syntax to suggest the different languages. Scots is shown in a vernacular to suggest the language concerned.
Changed place names need to be supplied for the publishing team, e.g. Dubrovnik and Gdansk for the map maker."

Q. Any characters who won't go away?

"Not really. The main characters are fixed. Facts about minor characters do arise - Dorothy reads 20 different magazines on renaissance history. "

Q. What are the relationship between UK and US editors?

"Originally they were independent, but later they got together. Main thing is the structure and their different feelings about how clear things should be made. US editor now send comments to Richenda and she combines them with hers before asking Dorothy. There is a lot of time pressure as two years is a very short time to produce books of this complexity. These days there are PC issues to consider. One scene Bob thought was too literary though Richenda thought it was ok - it was eventually rewritten. Richenda jokingly suggested that they should republish with both versions of the scene and let readers decide which was the best!
Regarding sex scenes, one person thanked Dorothy for not making them explicit in the way some writers do. She replied that if you're too explicit you run out of things to say whereas if you describe it as an act of love then there are always new ways to talk about it."

Q. Why do the supporting characters have little faith in hero?"

"It makes the books longer!! ;-) The reader should be also unsure about him."

Q. Any prospect of a new series?"

"No. Too much work, but more importantly there would be too many other people dependent on her and she feels that wouldn't be fair to them."