How I got Involved 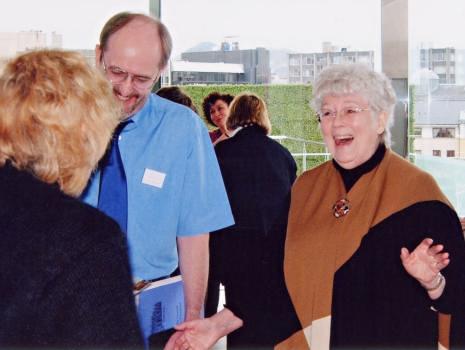 Me with a laughing Dorothy at the first DDRA AGM weekend

It is now some time (18 years at time of re-writing this) since the the publication of Gemini, Dorothy's death a year later, and the demise of James Thin, the Edinburgh bookseller for whom I worked and through which I met and worked with Dorothy and supplied her books to thousands of people all over the world.

Because of that length of time I may not be as familiar to some of the readers who are coming across this site for the first time and I thought it might be as well to explain the background to my involvement. When I first sat down to write something I realised that I could hardly do better than to use the text of my contribution to the commemorative book which was presented to Dorothy at the 2000 Gathering in the Great Hall of Stirling Castle. (This leather bound volume contained within a superbly hand-crafted wooden box inlaid with silver was a source of great pride to her, consisting of messages from friends, colleagues, fellow-writers and readers.) So here is the first part of my entry in that book, written in 2000.

A Web of Intriguing Reading

My connection to the world of Dunnett has been a little different from that of most readers - in fact of course it didn't start as a reader at all. When I set up the internet connections at James Thin the Booksellers I was only a little aware of Dorothy and her books, although I had already met my first American Dunnett fan - Tim O'Reilly the publisher of the well known computer titles had visited me when I ran the large Computer Books Dept and the first thing he asked was "where are the Dunnett books"!

In fact I was far more familiar with Dorothy's husband Alastair's writing through his editorship of The Scotsman newspaper which I had started reading as a teenager. It’s probably the case that Alastair influenced much of my early opinions on many matters, and particularly on Scottish self-government, and also that his writing style, which permeated the Scotsman’s content for many years afterwards, largely affected my own.

I'm afraid that my previous opinion of "historical fiction" was not very high - I had read the sort of general stuff (pulp historical fiction?) that my mother and wife had read, and found most of it fairly awful - and probably still would - but little did I realise then what I was missing in discarding the whole genre.

Having moved to running the computers instead of the computer books, I had just set up our first proper email capability when Douglas Brown of our Order Dept, who had up till then shouldered most of the burden of dealing with years of enquiries for the books, happened to ask if I could answer an question from a Dunnett reader who had quoted her email address on a letter. I did so and soon received a delighted reply not only from her but also from a number of other on-line fans who were ecstatic to find they could contact us by this method. I had stumbled across Dunnetwork! - life would never be the same again!

Soon I was answering all sort of questions about these mysterious books and was learning the names and availability of them off by heart. At this time the Lymond Chronicles weren't in print as they were being transferred from Dorothy's previous publisher, so there were plenty of questions although often the same ones came up again and again. Not long after I was setting up our first web pages, and of course I had to think of what to put in them. Would the Dunnett fans be interested in a page devoted to Dorothy? Well the response nearly swept me away! Yes yes yes!

Those first pages were very basic compared to the extensive collection that is there now, but they served their purpose of giving fans a place to get the definitive information and they proved a magnet for new people who had just got online and hadn't met anyone else who'd read Dunnett. How many messages I've had that have started "I thought I was the only person who read these books until I found your pages".

Now the art of bookselling is largely one of skillful deception!! One must be able to discuss and recommend any book on any subject that falls within your orbit, while convincing your customer that you know all about it. Physics professors will expect you to be able to compare titles at PhD level while the next person in the queue wants the latest news on molecular biology research, or economics or ancient history. So here I was doing the same thing by email on Dorothy's books. I knew as much as anyone could about the availability and plans but very little about the contents, yet most people assumed I was a veteran reader.

Having long since realised that these enthusiastic fans were an unusually discerning lot and having “dipped” a few times into copies that crossed my desk I began to get a hint of the flavour of the books, but it was my second meeting with Dorothy that convinced me that I had to read them. As anyone who has met her will surely testify, she manages to be at once the most charming and modest and yet obviously talented and intelligent person that you could hope to come across - and those twinkling eyes suggest (correctly) an impish sense of humour. I was intrigued and hoped that the books would give an insight to the mind of the person and I was not disappointed. I already knew that Lymond was to some degree based on Alastair, but within a few pages of starting Game of Kings it was clear that there was also much of Dorothy’s own wit and brilliance in Francis Crawford, and unlike some readers who profess to not having decided on his essential goodness until well into the book it was obvious to me that here was one of the great heroes of literature.

Having the advantage of a background in the history and geography of Scotland, and being both immediately comfortable with the writing style and delighted by the challenge of the depth and complexity of the plots, the series was eagerly digested - to the astonishment of my (then) wife Fiona who knew my preference for factual books and disdain for most fiction. Before long I had to “confess” my conversion to the readers of my Dunnett newsletters - which had grown out of the simple email announcements of the new and reissued books - and the members all reacted with delight as well as surprise and asked for my reactions and comments as I read. They were told of the occasion of sitting outside my holiday hotel in Slovenia and laughing helplessly at “Ué the elephant” in Queens’ Play, with my fellow guests giving me some very odd looks, and that being a Scot had also allowed me to spot the name of Abernaci as being one to ring the plot twist alarm bells. Naturally I fell in love with Phillippa in the same way that the mostly female fans fall for Francis, and being an expert chess player the game of death in Pawn in Frankincense had an extra resonance. Ringed Castle’s frozen brilliance and tragic shipwreck were remarked on with the enthusiasm of a now devoted fan while the many wonderful scenes in Checkmate simply took my breath away from start to finish and was described accordingly - I had the bonus of finishing it on my birthday which fortunately fell on a Sunday that year.

So, having started out with putting together a business related information page on an author almost unknown to me, I was very happy to later be able to tell Dorothy in person with complete truthfulness that I regard The Lymond Chronicles as the finest fiction I’ve ever read.

Since then I’ve become a regular on Dunnetwork and Marzipan and Kisses so my mailbox is forever overflowing(!) and the demarcation between work and leisure has blurred completely. But amongst the great pleasures for me has been that I now have around 800 new friends and have seen my interest in history expanded to cover many areas that I had only a general knowledge of before. That is the Dunnett effect - there are thousands of readers who now eagerly read about such diverse topics as Scottish 15th century coinage, Russian politics and the trading effects of Alum mining and dyeworking on Renaissance Europe, who might never have known some of these things existed. People scour art galleries looking for pictures of Venetian bankers and Brussels traders, or seek out the Icelandic Sagas to broaden their understanding of an ancient king who was later “framed” by Shakespeare. We are all immensely broadened in our outlooks and knowledge of the world - and all while enjoying a series of books from which we’ll still be discovering new surprises long into our old age.

So that is how I got involved. Little did I guess that only a year and a half would pass before she was taken from us and that two months later the 152 year old company for which I worked would collapse. With it went the 600 or so web pages I had built, but I was determined that the Dunnett pages would not disappear and I registered the dorothydunnett.co.uk domain and rewrote them into the form that was here from 2002-18, gradually expanding them and adding a blog.

I was already on the committee of the Dorothy Dunnett Readers' Association (now the Dorothy Dunnett Society), became its membership secretary for 8 years and had the honour of being Chairman for two years. Around that time I was invited to give a talk on Dorothy in the Carnegie Library in Dunfermline - a copy of which can be read here. However the pressures of running my own business forced me to step down from that post as I felt I didn't have time to give it the attention and leadership it required, but I'm glad to say that they have since gone from strength to strength. Those same pressures meant that for too long I wasn't able to give this site the complete overhaul that it needed, as web technology and programming techniques changed, until now, and apart from the occasional blog post and the two talks I gave at the DDS Edinburgh AGM weekend on Marthe and later on Jerott, my activity declined somewhat. Happily I have been able to continue promotion of Dorothy's work via Twitter where my address is @spiderbill.

Now with retirement beckoning, I have a little more time to revamp this site and write more articles about Dorothy's characters, and I hope to again become more active in promoting the books and helping to keep alive the knowledge, erudition, and love of Scotland that was the hallmark of this most brilliant of writers, so that she may take her rightful place in the history of literature as the natural successor to Sir Walter Scott, and be recognised for her contribution to historical research and the culture of Scotland.